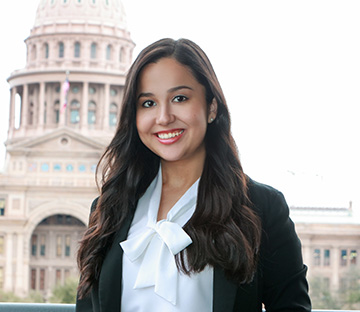 Bianca Danielle Garcia was raised in the small border-town of Donna, Texas. Her political endeavors began while majoring in Political Science and minoring in Legal Studies at the University of Texas Rio Grande Valley, where she also served as president of the UTRGV College Republicans.

In the fall of 2018 Bianca was selected among thousands of applicants throughout the nation to participate in the White House Internship Program. While serving as a White House intern in the Office of Political Affairs, she assisted in a variety of tasks, including preparing research briefs on national, statewide, and local topics that affected policy and the Administration’s platform. Within her first week of the internship, Bianca was selected to introduce Housing and Urban Development Secretary Ben Carson for the White House Speaker Series.

Upon returning home, Bianca continued in the political realm by working for the Republican Party of Texas under Karl Rove’s Volunteer Engagement Project. Not only did she contribute to wins for 4 out of 5 of her targeted races at the state house, congressional, and federal level, but she assisted in registering over 200,000 new Republican voters for the 2020 election cycle.

Receiving recognition for her political achievements, in 2019 Bianca was named a ‘Rising Star’ by the Republican National Committee and was awarded the Key to the City of Donna.

Bianca currently resides in Austin and is a member of the Templo Bethel Pentecostal Church.